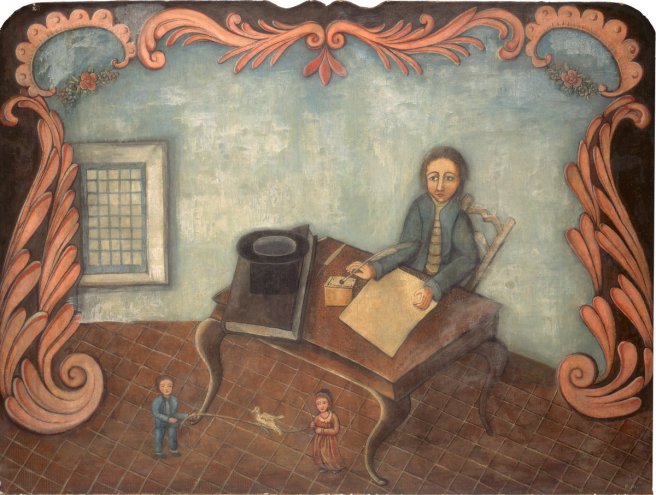 A man at a writing table, as depicted by an unknown 18th-century American artist (National Gallery of Art)

I was talking to a friend the other night…via texting. She had not read any of my writing, so I sent over a book jacket synopsis for my latest novel to get fresh eyes on it. I wanted to know if she would be hooked based on the five lines summing up the storyline. Well, her response was more than enthusiastic!

How lovely for me– someone who likes the storyline of my next novel.

Then, the dreaded words lingered on the screen: “You are very good at pulling someone into what you are saying without being overly wordy, descriptive, or cliché. I remember listening to you talk about food, or fabric, or even plants….you drag a person in with just enough…But I feel like you are holding back…”

My third novel is killing me. Yes, literally, slowly bleeding me out, with pain and agony.  I am trying– too hard –to get it “right.” This could possibly be the one that could interest agents and/or publishers. Or, at least, that is my hope. (An editor at at large publishing house already told me so when I proposed the idea.)  The pressure is on! And it is leading me on a journey of self doubt. Thus, my writing is changing and my voice is getting covered up, or in this case, being deleted from the pages of my novel.

As I have previously expressed, I am trying to fill a gap in the marketplace with my writing. But the industry is funny…they claim they want “new and fresh” voices, but because the publishing world is so stagnant, “new” is a relative word. Filling “gaps” is code for not finding a place on the selling floor, therefore unpublishable.

Technically, I am not “new” in what I am offering. I am trying to bring back the concept of realism, but in a modern way.  So, what is realism, and what does that mean for today’s writing?

I write stories about real people as lovers, parents, friends, and foes. The “action” is the consequences and the affects one’s life has in their decisions in a realistic way, not fantasy. I want to have a moral compass for them to learn from, develop, and grow. Does that mean my first novel, Finding Jane, about a woman who falls back into the early 19th century isn’t “real.” Fiction is storytelling. Finding Jane is a story…but the characters are as real as you and me – the way they think, react, behave, desire, etc. Realism is writing about characters, their inner working of the mind, and the delicate play of emotions. It attempts to lay an internal struggle for the reader to see. Most of the “action” is internalized. It isn’t a 60 second video, keep ’em preoccupied, instant gratification style. It is intelligent stimulation, not visual stimulation. The realistic novel is about the character rather than the plot or turn of phrase. Changes in moods, perceptions, opinions, and ideas are the turning points or climaxes…not an “action”. A realist writer tries to create an intricate-layered character who can be felt as though they are flesh and blood creatures. People you want to know, invest your time, and live with. It is an adventure unto your own imagination, not one given to you as eye candy, but mind candy.

I know…who wants to think anymore? Sit-com stories are the craze. Read ’em and leave ’em is the “new” phase of publishing. Get to action! Kill the superfluous! Don’t drag on any backstory. Kill the adverbs. Cut the adjective. Show don’t tell. God forbid you let the reader get to know and understand anything deeper about a character other than how to get to the next action scene!

What happened to literature? Wasn’t the whole idea of reading to imagine? Do you realize that 99% of all classics would NEVER get published today with the rules and restrictions writers are up against?

The thing is, I am not that reader– the kind looking for instant gratification. And I know I am not alone. Not everyone, old and even the young, wants to be spoon fed their literature. There are readers out there who want “real” literature. And I am not talking about stuffy, verbose, “intelligista” narrative driven, or art-for-arts sake literature. (That is another blog for another day.) Readers are looking for great novels with meaning, purpose, depth, values, thought, romance and entertainment, but not just entertainment.

This is the gap I am trying to fill. This is what my friend was talking about when she said, “My favorite books involve all 5 senses without being overly wordy or descriptive. Just enough that you get the picture and use your own imagination. And not too much that it bores you with adjectives and clichés.”

I want to give my friend, and readers like her, exactly what they are longing for.

But I am failing with my third novel. I’m trying to be “commercial” and less wordy. Less adverbs. Less showing. Get to the action! But while listening to all these “rules” in publishing, I am being less me! I’m trying too hard to become pedestrian. I have something unique to offer the 21st century reader…even if what I’m offering is a 19th century idea. (An idea that led to a revolution in writing and has given us classics that are still on the top reading lists today!)

I am not being true to myself.

I need to write with my voice, not just with my hands. I do have something new and fresh to offer the publishing world. As Jane Austen said about her own writing, “I could not sit seriously down to write a serious Romance under any other motive than to save my Life, & if it were indispensable for me to keep it up & never relax into laughing at myself or other people, I am sure I should be hung before I had finished the first Chapter. –No– I must keep to my own style & go on in my own Way; And though I may never succeed again, I am convinced that should totally fail in any other…”

So, I am taking my friend’s advice, “You are marketable!!! Be you! It will sell.”